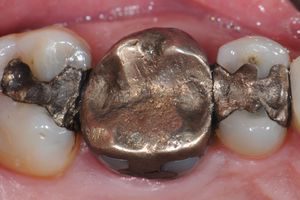 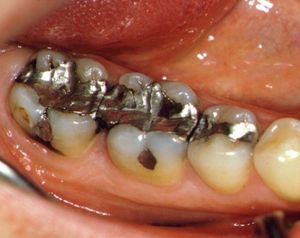 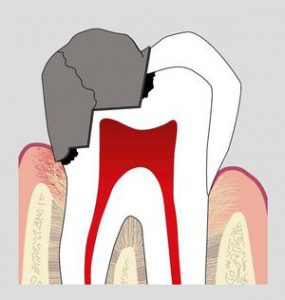 Amalgam is on the one hand the mostoften used and at the same time the controversial filling material for defective teeth – not least on grounds of his grey colour and the bad aesthetics. Amalgam is no firm alloy separate only one mixture of different compositionfrom in each case up to 50% of mercury, 40% of silver, 32% of tin, 30% of copper, 5% of indium and 2% of zinc. .

Before all person who have several different metals in the mouth (possibly gold, amalgam, silver), raised mercuryvalues show in the body, because mercury ions from the amalgam can besolved by the electro-chemical corrosion (battery effect) in the mouth (see photo: “Gilding” of an amalgam filling).
By Abrasion (wear of the teeth underfunction) the treacly metals copper and tin also reach in the organism. Mercuryis taken up above all in the form ofmercury steam. With the admission of mercury it comes to increased removalin the urine and for the storage of mercury in the body, above all in the fatty tissue. This allows the neuro-toxiceffect of the treacly metal, because nervous fabric is surrounded among other things by fat..
Hence, the removal of the fillings occursin our practise under high preventivemeasures like suitcase dam, slowly torotary instruments, double Absaugungand breath protection.

Amalgam, or mercury can release ongrounds of his toxicological andimmunologischen effect a lot ofsubsequent illnesses which can breakout according to physical condition, orload degree sooner or later.

An other danger for the tooth assumesfrom the fact that amalgam does notremain stable in the edges under thechewing load in the long run. The volume of the filling is increased in the course of the years by oxygen effect, theedges crumble, become leaking, breakoff or there originates gap corrosion. Inthe bad Estonian case the tooth is blownup formally, how rock in winter by iceformation in columns.

We are a practise free of amalgam and offer in cooperation with our medicalpartners an examination of the treaclymetal load in the mouth and in the body, as well as a heavy metal detox after amalgam to distance.